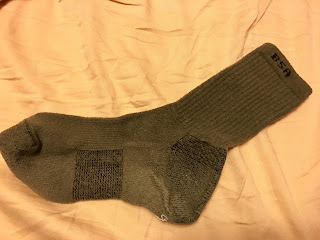 This morning, while getting ready for work, I discovered a lone, Scout Sock in my drawer. Yesterday, while in a meeting at work, I received a phone call from my oldest son, the Eagle Scout. He doesn't usually call me at work so I stepped out of the room and answered. He was calling to ask me where my solar charger was and to tell me that he was taking all of my Scout Socks. He was packing for the National Jamboree and he was doing me the courtesy of telling me where my stuff went before I just discovered that it was gone. This is a running joke in our house. I buy some gear, and it is usually only a matter of time before it becomes his gear, even if he already has some of his own. Even socks are not exempt.

That should really be the end of the story, but it got me thinking about how proud I am of him and all that he has accomplished. He's off to help staff the zip lines at Jamboree, but he made his own travel arrangements, helped his friends with theirs, and got himself to the other side of the country. It will be his fourth such solo trip to that camp, and I am certain that he will get himself around, and back home again, just fine. He even did a bunch of work to earn spending money. He is making this journey on his own because he can. We are only a phone call away and ready to lend aid if needed, but I doubt that he will need it. I only have another year with Alex before he goes off to college. I will probably be a wreck, but I think that he is ready.

I finished getting ready for work and went out to the living room to get my youngest son so I could drop him off at his school. Yesterday, I told him that his brother was leaving for camp, and Theo said that he wanted to go, too, because he wanted to be a Scout. I told him that he couldn't go with brother this time, but that he would have all of his own adventures and that he would have a lot of fun. He was happy with that answer. This morning I looked at him and noticed that his knees were still all dirty from playing outside yesterday. I took him into the bathroom and did the best job that I could to scrub off a layer of dirt, but I had to be careful because his legs are all covered with bruises. He and his buddies at daycare play hard all day so Theo is frequently bruised and dirty, but very happy - just like his big brother was at that age.

They call Boy Scouts a youth program and it is, but as a parent, I have gotten so much out of it, too.  I have loved all of my adventures with Alex and I can't wait to take that journey with Theo. I am sure that one day I will receive another call letting me know that he will be taking all of my socks, too, and I will be just as proud.