I found this recipe on givemesomeoven.com and made some modifications so ingredients would come out to even amounts, and so I would know what to buy. For example, the original recipe called for 16 tortillas, but they come in 12 packs. The original recipe also called for three cups of cheese, but they sell cheese by weight, not by how many cups it makes when you shred it, and I had no idea what size of a can of enchilada sauce to buy so I worked that out, too. Also, I wanted to use my 5qt Creuset braiser instead of a casserole dish so I could use the lid instead of aluminum foil to cover it, and also so it would stay warm longer after I took it out of the oven. Anyway, this fed 4 adults, a teen, and a 5-year-old, there were leftovers, and everyone liked it. 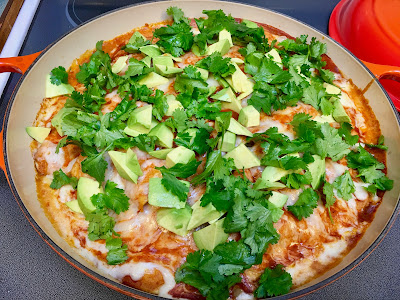 
*Be sure to check the label of store-bought sauces to find one that is gluten-free.

*To make this recipe gluten-free, be sure to check the labels of all ingredients to double-check that they are made gluten-free.