February 13, 2017
We found this recipe on Cooking Light. It is mostly correct, but I made some changes to make it taste better and to make it slightly easier to cook. At its heart, this is chicken soup. I don't know how much science there is in calling it "Immunity Soup," but to quote Tom and Ray from Cartalk, "It can't hurt." 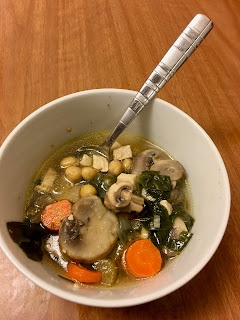