Who's Mom Is This 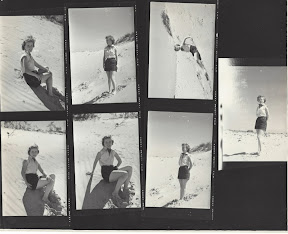 My sister has been sending me care packages of old family photos and documents, and some of them have been a real eye opener. This series of photos, in particular, is amazing and presents several questions.

This is a contact sheet - a real one, not some modern reproduction, of photos of my mother. Contacts sheets were made by placing several negatives on a piece of photo paper and then exposing them all to light. I used to make these with 35mm film and what you get are tiny pictures because the negatives are small - except these are enormous. I don't know what kind of camera made such large exposures. A Brownie? Some medium format camera?

The really big question is, where did this girl go? This girl is happy, smiling, and posing for the camera. In my lifetime, my mother never allowed anyone to take her photo. She would get extremely angry if anyone did, but then again, she was angry most of the time. The only photo that my Dad had of my Mom was her high school senior photo.

My mom is still alive, but she had a stroke in the late 90's and can't really communicate any more. She never did speech therapy because she thought that it was stupid, but it hardly matters because they probably couldn't have gotten the story of these photos out of her at Gitmo. It's too bad. I would like to have known this happy young woman.

Anthogna said…
I find it interesting that my only memories of her smiling are post-stroke.
January 13, 2012 at 11:14 PM