September 11, 2010
My sister recently sent me a box of letters and papers that my great-great aunt Katie had kept. Among them was this letter from my great-great grandfather, James Scott Bookless, who went by his middle name, Scott. He had set out from the family homestead near Abbyville, Kansas in search of work and he was writing home to let my great-great grandmother, Jennie, know how it was going. The family continued to live on the farm, so I am assuming that they just needed some extra cash to make ends meet. They had married in Illinois five years earlier and then moved to Kansas to stake a claim and build a farm.

At the time that this letter was written, they had 2 kids and Jennie was pregnant with their third. James had just turned 41, and had been married before and had six children from his first marriage. It seems as though the youngest, Addie, was still living with them. Jennie was only twenty five. Jennie was left at home with three kids, away from her home in Illinois, pregnant, in a sod house on a farm, while Scott headed out to seek work. It was October, and raining. In 1879 their only way to communicate would have been letters like this one.

In the letter, Scott is writing from Florence, Kansas which is only 79 miles away, but the journey in a wagon drawn by horses took 5 days. Google maps says that today this trip would only take an hour and 27 minutes. He set out in a wagon with a team of horses. One of the horses hurt it's leg, and he had to put the horses in stables because of bad weather on several nights. I can imagine that this would be been a setback since he was trying to save money by only eating one meal a day. Even so, he still gave bread to a couple of travelers who had no food or money. At the end of the letter he includes a little note to the kids, and it is obvious that he cared for them.

Here is my transcription of the letter, to the best of my ability. The story is kind of amazing as compared with how things are today. Scott was not a big user of punctuation, so I have added some where it seems appropriate. The grammar is not perfect, but you will get the gist of it. I have tried to fix the grammar for the sake of clarity in some places, but I have tried to keep to his wording where ever possible. 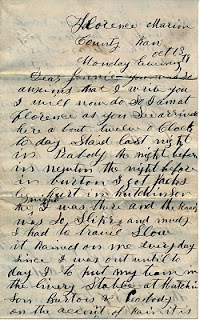 Dear Jennie - you was so anxious that I write you I will now do so.  I am at Florence as you see. Arrived here about twelve o'clock today. Staid last night in Peabody. The night before in Newton. The night before in Burton. I got Jack's [one of the horses] leg hurt in Hutchinson the night I was there and the road was so slippery and muddy I had to travel slow. It rained on me every day since I was out until today. I [had] to put my team in the livery stable at Hutchinson, Burton, and Peabody on the account of rain. It is 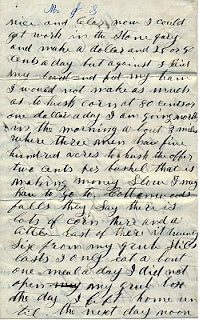 nice and clear now. I could get work in the stone quarry and make a dollar and 25 or 50 cents a day, but against I paid my board and feed my team I would not make as much as to husk corn at 80 cents or one dollar a day. I am going north in the morning about 3 miles where three men have five hundred acres to husk. They offer two cents per bushel. That is making money slow. I may have to go to Cottonwood Falls. They say there is lots of corn there and a little east of there it twenty size. From my grub [something] lasts I only eat about one meal a day. I did not open my grub box the day I left home until the next day noon. 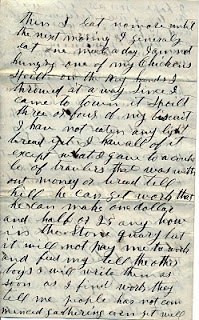 Then I eat normal until the next morning. I generally eat one meal a day. I am not hungry. One of my chickens spoilt on the my hands. I throwed it away. Since I came to town it spoill three or four of my biscuits. I have not eaten any light bread yet. I have all of it except what I gave to a couple of travelers that was without money or bread. Tell Hill he can get work, that he can make one dollar and half, or 25 anyhow, in the stone quarry, but it will not pay me to work and feed my [team]. Tell the other boys I will write them as soon as I find work. They tell me people has not commenced gathering corn yet. Well 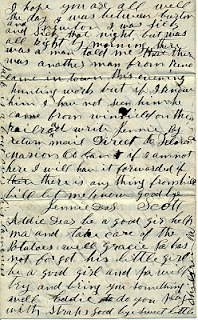 I hope you are all well. The day I was between Burton and Newton I was sick and sick that night, but was alright by morning. There was a man told me that there was another man from Reno [county - where Scott was from] came in [to] town this evening hunting work, but if I know him I have not seen him. He came from Winfield on the railroad. Write Jennie by return mail direct to Florence, Marion County, Kansas. If I am not here I will have it forwarded. If there is anything from hill bill let me know. Goodbye
Jennie Dear     Scott
Addie Dear be a good sis. Help ma and take care of the potatoes well. Gracie, Pa has not forgot his little girl. Be a good girl and pa will try and bring you something. Well Eddie do you play with [something]. Goodbye sweet little children. Pa"

In the margin is written, "Jacks is about over his lameness."

Unknown said…
Thank you so much for this. James Scott Bookless was my mother's great grandfather as well. She has such fond memories of Katie Bookless, who was a "character" (I am told) and the sweetest woman. My mother remembers an huge old weaving loom that Miss Katie owned, and we have several pictures of her with it. Do you have any idea what might have happened to it when she died? Any information would be wonderful.

Unknown said…
Thank you for this! James Scott Bookless was my mother's great grandfather. She has such fond memories of her Aunt Katie Bookless. We have several pictures of her with her huge weaving loom and wonder if you know what happened to it when she died. Any information would be wonderful.