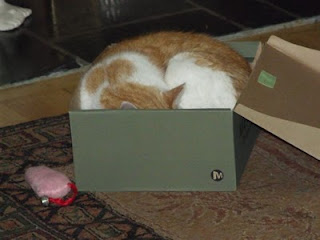 George the Cat has returned. He moved out for a while, but now he's back.

George was a neighborhood cat for a long time. He knew where all of the good handouts were, and he made the rounds, but he always stayed just out of reach. Many cats didn't like this rough cat coming around and they defended their territory, but George is a tough guy. He has scars on his face and pieces missing from his ears from frequent fights. George can fend for himself, too. He will wait patiently, sitting for an hour and half next to a mole hill so he can eat a juicy mole.

George became our friend when we found him in the backyard one day. For once, he didn't run away when I walked up to him, and I discovered that he was bloody and had an abscess from fighting. I took him to the vet and got him patched up, and when he had recovered, he decided that he liked hanging out with Alexander and I. Gracie the Cat was outraged by the invasion of this stinky boy, but he was used to that, and most of the time they just stayed out of each other's way. Over time he learned to clean his fur by watching Gracie, and he tried to be friends with her, but she was still having none of it.

A little over a year ago I started dating my next door neighbor, Amber. Amber has 2 cats, Dimitrious and Flipper. Where George is silent as the night, Dimitrious is like a bag of hammers. For a while, George amused himself by using Dimitrious for pouncing practice - leaping out from behind things and scaring Dimitrious so badly that I thought that he might turn inside out a couple of times. Eventually, Dimitrious and Flipper became more comfortable and now they have decided to live here with all of us. That was just too much for George. He started leaving for days at a time, and eventually just quit coming home. We would catch glimpses of him, and the neighbors reported that George still walked his normal patrol route looking for moles, but he was gone. Alex and I were sad because George is a really great cat, but when we did see him he looked clean and well fed, so I knew that he had just moved in with a neighbor.

A few days ago one of my neighbors saw me outside and told me that George was sitting outside a house around the corner. The man that had taken George in had moved away, and George was sitting outside his house. I called to George and he ran up to me and walked back to our house with me, but didn't want to come inside because of the other cats. George *really* does not like to be picked up, but I sacrificed a bit of extra skin and carried him inside and showed him where the food bowl was. He hissed and struggled, but he didn't hit an artery and then he did gobble down some food. I showed him the cat door and he ran out right away. Over the next few days he kept coming back - each time a bit braver and staying a bit longer. Today he sat in the backyard with us while we pulled weeds, and even stayed in the house and had a nap when we went out. Tonight it is raining and cool, and I hoped that George would stay. He was pacing around, his eyes droopy, and I knew that he wanted a place to sleep, but hadn't found a good spot, yet. I fixed up a nice blanket on the spare bed for him so he could have some privacy from the other cats, but George isn't used to fancy stuff like that. He curled up in a shoe box on the floor and fell fast asleep. The other cats are all sleeping, too, and for tonight, anyway, George is home, and all is well.