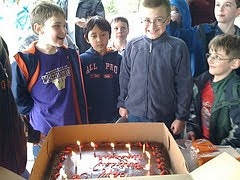 Alexander turned 10 this month, and we had to choose what kind of party to throw. Alex likes to have a big party, of course. He wants to invite all of his friends from school and Scouts, and he wants family to come, too. Over the years we have had the parties at our house, at the bowling alley, and at Chuck E. Cheese. Some of his friends have also done mini golf, and the "fun center" nearby which has go carts, etc. All of the commercially hosted parties have the same issue - a lot of expense, and only a set number of kids can come. They usually are timed very tightly, too, so you are in and out and the kids don't really have a lot of fun to play. That is ok when they are small, but now they really need time to just be boys. We thought about having the party at our house again this year, but a hoard of 10 year old boys was too terrifying even to consider. In the end, we decided on a beach barbecue.

We are fortunate to live reasonably close to Seahurst Park in Burien. As you may well know, Seahurst Park is right on Puget Sound and has a very nice, very long beach. We go there quite often, and I know that one of Alexander's favorite things to do there is to dig holes and make sand castles, or sand forts, or sand you-name-it. So, my expensive and sophisticated plan for keeping a dozen 10 year old boys (most of whom are in the gifted program) busy for 4 hours? I gave them a bucket and some gardening trowels and pointed them at the beach. That's it. 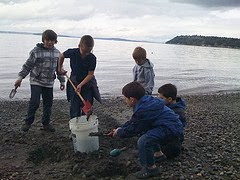 While the kids were digging away on the beach, the parents and family members hung out by the BBQ drinking coffee. It wasn't that cold out, but the warmth was nice. Eventually I decided to light a fire in one of the unused BBQs , and Alexander's great-grandfather and I had fun collecting and breaking up sticks. We, of course, cheated and used newspaper to get the fire started, but when the kids came by we told them that we rubbed sticks together and they they believed it since Bob and I are old Scouts.

I lit the charcoal, and when it was ready we called them back. Amber organized the kids and I grilled them burgers until they couldn't eat any more - which was a lot - and Alex opened presents. Candles were blown out, and cake was eaten - and then they were all back out on the beach. They were working together to dig holes, fill them with water, and then try to build little dams to protect them from the incoming tide. We had a small intermission for a pinata, but then they were back to the beach, again. It started to rain, and they didn't notice. Then it started to downpour, and they just worked harder. With about a half and hour left to go I called them back up and gave them Pokemon cards and then the area under the picnic shelter looked the floor of the stock exchange because of all of the heavy trading.

Since Alex and his friends have been alive, there have always been video games, the Internet, cell phones, DVD's, etc. I love it that they can have so much fun with a bucket, some shovels, sand, water, and drift wood. I don't know if it will last, but I hope that they never outgrow it.