Gracie and the Raccoon 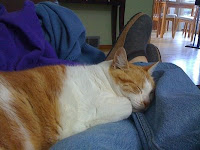 Gracie is my fat cat, and apparently, a super hero. She even has a tragic flaw like all good superheroes. Her previous owner named her Gracie because she is just not that graceful. Trapped in a studio apartment before I adopted her, she grew fat and desperate to get outside. Now she lives with us and spends her days moving from prime napping spot to prime napping spot. She naps in the sun. She naps in the shade. She naps under shrubbery. She naps on neighbors porches. Once in a while she will chase a squirrel (she usually can't be bothered), but stops quickly because she is tuckered out. The squirrels are not scarred. She talks a lot, too. Mostly she wants food, or to be petted, or for me to sit down so she can nap on me. My son and I often speculate about what the cats do during the day while we are gone. We joke that they only pretend to be lazy but as soon as we leave they are off to fight crime. Now I am beginning to wonder if that might be true.

Yesterday I was working from home at my desk in the basement. Gracie was fast asleep on the couch behind me when she suddenly jumped up and ran to the cat door. On the rare occasions when she does run, it is usually a hopping, flobbery kind of run, but this time she was running like a predator – hunkered down, fast, and silent. She ran to the cat door and gave a great swat and a hiss. A raccoon had been trying to come into the house (again) and she smacked it in the nose. Gracie. The fat one. I was as amazed as the raccoon who just stood there staring at us. I went to retrieve a raccoon dispatching device should it decide to come into the house, but I should not have bothered. When I got back downstairs I saw that Gracie had chased the raccoon across the yard and over the fence. She was sitting there on guard to make sure that it didn’t come back. I could not believe it. Even George, my hunter killer cat was shocked and ran back into the house with me.

I moved my live trap right next to the cat door and baited it with cat food and went back to work. A couple of hours later I brought my son home and he heard a meow as he went downstairs. It was just Gracie’s normal “hello” meow, but he spotted that she was stuck in the trap eating the food. Again. Sigh. Her tragic flaw. He opened the door so she could get out, but she didn’t want to leave the food. Eventually she backed out – too fat to turn around. She finished off the day with her usual series of naps in various sun beams, and even went next door to sit in my retired neighbors lap for a bit before returning to her naps – or perhaps her naps are just her way of maintain a constant state of readiness so she can leap to our aid should the need arise. I think it is the later one.