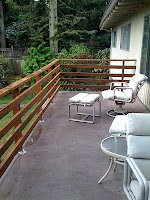 One of the joys of home ownership is that one owns the whole house. The good bits and the rotten bits. All yours now. That is one thing that real estate agents, mortgage bankers, and other home owners seem to fail to explain to people that buy houses. With the purchase of the house you will also inherit a permanent, expensive hobby: home maintenance. Yard maintenance, and building maintenance. Oh you wanted to go and do something this weekend? Perhaps you would like to purchase some nice thing for yourself. Hahahahah. Um, no. My friend, allow me to show you around Home Depot. Get to know the merchandise. Meet the staff. You will be spending most of your free time, and disposable income, here. There would not have been a mortgage crisis if someone handed out a pamphlet like that to prospective home buyers.

Our latest project at the house was to replace the deck railing. All 67 feet of it. The project started simply enough. "Oh look, a rotten board. I should replace that." Then, "Oh, there is another, and another, and oh, that doesn't look good, and #%$!" Upon close inspection, more than half of the boards appeared to have "dry rot." Dry rot. In Seattle. The deck railing is wet 9 months out of the year from all of the rain. We need a new name for that. Anyway, I have known about the railing for a while now, but here we are at the very end of summer and it was time to do the railing.

As we get into September in Seattle a kind of panic sets in among home owners. The Rain is coming. September weather tends to be gorgeous, but we know that, any day now, it might start raining and not stop until July. There is always one last outdoor project that has to get finished before The Rain. The railing project started on such a Saturday. Alex and I started bright and early demolishing the old railing. Some boards that looked fine just crumbled when hit with a hammer. We filled the fire truck with the debris from the old railing and hauled it to the dump. The lineup of trucks of every description was testimony to the panic. The forecast for that weekend was sunny, but there was rain coming in the next week. It might just be rain, or it might be The Rain. The clock was ticking and everyone was working on their last projects of the summer. We dumped the old wood and headed down to Home Depot for new wood. It took us 2 hours in that store to get everything that we needed. The store shelves had been raided. Customers were everywhere. At one point I needed help from an employee and he kind of locked up on me. His radio was a constant wail of "will someone help me with such and such," and "I am still waiting on whatever, who can help me," and a "who can go help so and so." I asked a question about pneumatic framing nail guns, and the employee that was supposed to be helping me literally could not function because of the overload of too many nail gun choices and the cries for help coming over his radio. Fortunately my neighbor happened to walk by and mention some deck screws that I could use with my cordless drill so I just walked away and left the catatonic Home Depot employee standing there. Someone should check on him. He might be huddled under a display somewhere in the hardware section.

We loaded up the firetruck with all of our purchases and headed for home. One of the things that I decided to do was to use some of that deck waterproofing stain that I had seen on the TV. You spray it on and golly, what a nice looking deck and see how the water beads up. They even sell a sprayer that is made just for it. Fancy. I am telling you now - do not buy the sprayer. The people who sell that sprayer need to be beaten. Repeatedly. What a mess. I should have just brushed it on, but I was in a hurry. The Rain was coming. Alex and I worked dawn to dusk and got a lot of it done, but just could not finish. We stopped Sunday night when we were both so tired that we could no longer hold up a 2x4 to screw it into place without dropping it. As the week went on we tried to fit in a bit of deck work around Scouts and Karate. We got almost finished - and ran out of boards. I had counted wrong. Dammit. As we got closer to the weekend the weather had deteriorated, too. Mornings were cloudier and grayer, until finally it just stayed gray all day. Thursday night, after Alex was in bed, I went to Home Depot to buy the last 7 boards, brought them home, and stained one side of them. Friday night I stained the other side. I was set up under the car port, out of the intermittent rain. Saturday dawned rainy. We did what we could, but it rained most of the day. Sunday morning - no rain. Alex and I managed to finish the last 16 feet with it starting to rain, then stopping, then starting, then stopping.

Now it is finished and the extended forecast is for rain every day but one. We just beat The Rain. Alex helped read the level and hold the boards so no, it is not perfectly straight (like I would have done better...). Putting on the stain was messy, so that is not perfect either - but it is done. From a distance it looks pretty good, too. It is our biggest single construction project yet, and Alex is getting old enough that he is really very helpful. I could not have done it without him. Either he will grow up knowing how to take care of his own house one day, or he will be convinced to buy a condo and let someone else deal with all of that. 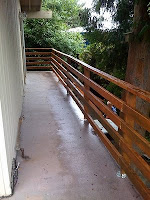 dan said…
that's a good story, especially the catatonic sales guy. I checked the picture, and yes, that is water beading on the boards. You have "The Rain," capitalized. Has it started yet? We're still waiting on "The Snow."