January 28, 2008
Recently my Dad passed away and my son and I went back to Kansas for the funeral. Things were about what we expected at the funeral. Lots of passive-aggressive relatives acting poorly, people we've never seen before claiming to be relatives or dear friends, etc. On the plus side my Mom seemed glad to see all of us and we helped clean out some junk from the house. I should mention that my parents have not been what one could call "social" or "friendly" in decades. I also secured and removed all of Dad's guns and ammo from my Mom's house. Mom wanted them out of the house and we didn't want her taking pot shots at the busybody neighbor that spys on her for my Dad's side of the family. My cousin did point out, however, that if my Mom started shooting up the neighborhood then her long term care would be taken care of by the State at no charge to us. I took this to mean that he didn't want me to unload the guns - just move them to a lower shelf where my Mom could reach them. My sister said we were all going to hell so we deiced to just get the guns out of there. I won't say that the ammo was old, but one of the boxes of shells - from Sears - had the original price of 49 cents on it. Fortunately my cousin is friends with the chief of police so he is going to check into the disposal of the old ammo. He said the boys at the landfill get excited if you throw live ammo into the dump. We are probably going to all make another trip at some point to help clean up the house and yard when and if my Mom is agreeable to it. 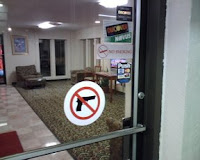 We could not have ordered better weather for the trip. It was in the 50's and 60's during the day. The hotel was typical small town. We paid extra to get rooms on the courtyard by the pool, and the clerk who took the reservation made a point to tell me about the free Wifi. When we pulled up to check in, the first thing I saw was a sign with a gun with a red circle around it and a line through it stuck to the door of the office. No guns in the office. We checked in and were told that the pool was closed because of some remodeling. When I tried to get on the Internet I couldn't, and then they told me that the Wifi doesn't work in the rooms by the pool. Nice. Every place we ate had portions that made Claim Jumpers look conservative, and everyone had pie. Even my Mom had made pie. These are not Costco pies, but Midwest, homemade, oh my goodness pies. My sisters made it a point to spoil my son rotten. Their kids are all grown and they have some idea that they need to spoil Alex in payback for alleged spoiling and corrupting by me of their children. Clearly I have no idea of what they are speaking. 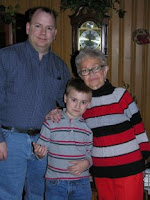 After the funeral we went over to visit my Mom's mom, the 93 year old Avon Lady. I posted a few photos. She was not allowed at the funeral because she would have started a fight with my Dad's mom. While I was there I checked her pistol that she keeps under the cushion of her knitting chair and, thank goodness, it was unloaded. We took her out to lunch and she invoked her right to start her meal with pie. She urged us to order pie first in case they ran out. Apparently that restaurant is where her camping club meets on the second Tuesday of every month. She said that they are all so old that most of them can't drive any more, and they have walkers, canes, and oxygen tanks, but they get together every month for lunch. I tried to pay for lunch, but when I took the bill my grandmother jumped out of her seat and acted like she was going to beat me with her cane if I didn't let her pay. I didn't feel like getting a whuppin' from an Avon Lady so I forked over the check fast. That evening my cousin ordered pizza from a guy who has a Papa Johns franchise in a trailer. He tows the trailer around to different small towns on some kind of regular route and he was in my home town on Saturday so it was a big deal to get pizza from the trailer.

After everything was over, my sisters and I sat in the shambles of the half remodeled motel courtyard that we had paid extra to be near and shared a bottle of champagne because the whole funeral/family ordeal was over and no one had to call the police or the SWAT team. Then the hotel turned out the lights in the courtyard at 9PM. Apparently it was time to go.