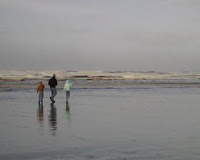 This year we went with my wife's extended family to Ocean Shores for new Years. They have been going for 20 years, or so, but we just never managed to get out there when my wife was alive. I decided that we needed to go because we have heard so many tall tales about family exploits at the ocean.
Seattle gets a lot of days of rain, and some occasional wind, but really the weather is pretty moderate most of the time. Storms that come in off of the Pacific break against the Olympic Mountains before reaching Seattle, so we have it fairly easy. City slickers sometimes go out to the coast for "storm watching" because they have something approximating actual weather out there. Our first couple of days at the coast featured rain, sleet, hail, snow, wind, and occasional sun breaks. For my Seattle native relatives this was something to see, but as my cousin back home explained to me, that kind of variation is just a normal day in Kansas. The hotel is actually made up of individually owned condos that are rented out as hotel rooms. The extended family and I rented 4 of them and the people at the hotel put us all together, so we just propped open the doors and were back and forth between all of the rooms. Someone is cooking down here - off we go. Xbox game over there? You get the idea. Alex had a lot of fun playing with his cousins and assorted aunts and uncles, as usual. They had a heated, indoor pool, too so the kids spent a lot of time swimming.
On the third day the weather became less annoying so we hiked out to the beach. Even though the hotel is an "ocean front" property, all of the beach at Ocean Shores is public so the hotel is set back a bit. There are some cool sand dunes between the hotel and the beach. When I walked on them they reminded me of all of the time in my youth hiking around the Sand Hills outside of Hutchinson, KS where we used to go hunting for pheasant and quail. The only difference was that the grasses on the sand dunes were pleasant and attractive while the vegetation in the Sand Hills is razor sharp, full of stickers and sand burrs, etc. Anyway, I kept expecting birds to flush as we were walking out to the beach. The beach is an honest to goodness sand beach. Many of the beaches on The Sound are very rocky - or all rocky - but this one is very broad and smooth. From the looks of it I think that we were out there at low tide and the beach seemed big. The wind was driving some pretty big surf just a little ways out. We took a long walk down the beach and then back to the hotel. Later, 16 of us went to ride go-carts. Alex was tall enough to drive his own and he did great. He was kind of laughing like a mad man most of the time, but he didn't take anybody out. That was his favorite part of the trip. One of the great-uncles bought 5 pounds of fresh clams and his son cooked them up in some wine, butter, and onions. Good golly. you never saw 5 pounds of clams disappear so fast. So good.
Coming home again was good. We were there 4 days which was fun, but also enough. Our cats were not mad at us, or too clingy, but they were glad to see us. I think that we might have to join the tradition and make this a regular trip.