August 12, 2007
Last Friday I dropped my son off at his great-grandparents so I could go to new employee orientation for my new contract job at Microsoft. I used to own a car dealership and my son has inherited my car nut interests. This is a good thing because his great-grandpa is a serious car nut and collector of classic cars and paraphernalia. Alex is really the first grandchild to show any interest in cars, so he and great-grandpa get along great. Great-grandpa Bob is often doing something interesting like working on a car, or polishing a car, and Alex loves to help him. Not long ago they watched Alex for me while I was at an interview, and Bob had him out there cleaning his beautiful, red Thunderbird convertible. Since Alex spent a lot of time at the car lot around nice cars, he knows how to clean them, not fingerprint them up, and how to be really careful. Alex really, really likes convertibles and can really appreciate what a nice car that is, so after they were done he talked Bob into going for a drive with the top down the radio on. He made sure that the boot was in place over the convertible top and all fastened down properly, too. Alex is no amature car guy. Bob thought that was great so they drove down by the ocean and all around and had a great time. Well, when I dropped Alex off on Friday I thought that they would just be there at the house. Right after I left Bob told Alex that there was a car show of classic Lincolns, so into the Thunderbird they went. Alex wanted the top down, but Bob wanted to wait until they got off of the freeway because, even though it is August, we seem to be skipping summer this year and Bob thought that it would be too cold. Alex is quite an operator, however, and he knows that great-grandpa is a soft touch, so he kept rolling down the window, sticking his arm out, and saying, "I don't think that it is too cold out." As soon as they were off of the freeway the top went down and he and great-grandpa were off to the car show. 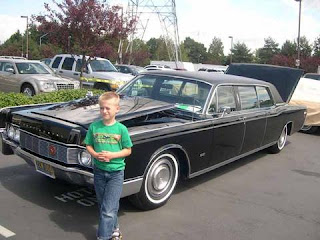 When they got there Alex really liked the cars. I asked him about his favorites and he picked out a 1960 Lincoln (gigantic) that was also one of Bob's favorites, a 1962 or 1963 Lincoln Continental limo (awesome), and a Lincoln hearse. He is kind of fascinated by funeral cars. Here is Alex with the Continental. It is hard to see, but if you look closely you will see the suicide doors in the back. When we went to the zoo today we saw this car. Well, I am assuming it was this one because there can't be that many spotless, black, 60's Continental limos around town, can there? 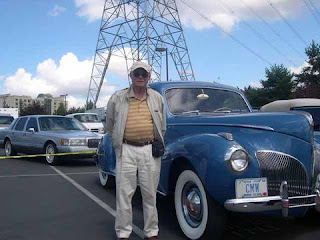 Alex took this picture of great-grandpa standing next to a classic Lincoln.

After they were done, great-grandpa took Alex to McDonalds for his second Happy Meal lunch of the day. I was in a hurry when I took Alex over to their house, so I picked up a Happy Meal for him. He had already eaten, but Bob feels that, as a great-grandpa, he gets to spoil the grandkids, and Alex is always hungry, so he happily chowed down lunch number 2. As he was eating, Alex told Bob, "My daddy is not going to be happy that I am eating all of this junk food." Bob told him to tell me that Bob had eaten the fries. :-)

Anyway, I was gone several hours and they just barely got home before I did. Bob gave me a bunch of photos of the day, and Alex told me all about the cars. Even though he is only 7, Alex is already planning strategies about how to ask great-grandpa to borrow the Thunderbird when he gets his license.