I am not much of a gardener, and I have a somewhat Darwinistic viewpoint about my yard. If it can't live there without my assistance then I let nature select it out. Unfortunately, there are some plants that really should not be in my yard, but there they are and they are thriving. The previous owners of the house felt like it would be a good plan to plant bamboo in the front yard. They planted some by the street and some by the neighbor's yard, presumably as screens. I have been in the house for 6 years now and the bamboo that was just growing quietly and not bothering anyone has now reached 12 to 15 feet in height and started sending out shoots of new bamboo under the neighbor's fence, and also into the middle of my yard.

Today it seemed like the time had come to begin the eradication of the front yard bamboo. Stop laughing. I know that bamboo is almost unkillable. After the apocalypse there will be cockroaches and bamboo. Well, I have to try, so my son Alex and I got out there and started to cut it all down. Alex always wants to help me in the yard (singing Bob The Builder's "Can we fix it? Yes we can!"), and of course, he always wants to use the biggest tool, so I let him have the loppers while I tried the machete. No luck. That bamboo is hard. I tried sharpening the machete - always helpful - and still no luck. The small clippers were just not big enough to cut the bamboo, so into the firetruck and down to the hardware store to buy a second lopper so Alex and I can both cut bamboo together. 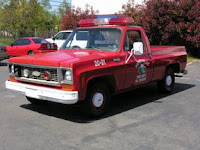 Firetruck? I should explain. In addition to my daily driver, a normal Volkswagen, I have a 1974 Chevy C-10 pickup that I bought at auction. It used to belong to the National Forrest Service who then leased it out to Pierce County Fire District number 20. I am only the second owner. It is red, has lights and sirens (working, of course), a public address system (the best part), and a spot light. It has all of the logos and marking still on it, too. It has a vinyl floor, no radio, no headliner, and no air conditioning, but it does have a 350 cubic inch V8. If you have to ask why I have a firetruck, then you don't get it. It's a firetruck!! You can drive any old truck to the dump or the hardware store, but when you drive the firetruck, it's an adventure!

Anyway, we ran down to the local, tiny hardware store and they had a great pair of loppers. I like to shop there whenever I can because I want them to stay open. It is so handy to be able to get simple things like that without having to go to the mega store. So we came back home and chopped down all of the bamboo and completely filled the back of the truck. Of course, our cats George and Gracie were out there keeping an eye on us. They love it when we are outside. Gracie likes to spy on us, and George often tries to help. If we are pulling weeds he will come over and chomp on weeds, too, like he is helping. We put the bamboo in the truck, and then chopped off the parts that hung over the back of the tailgate so we would not have bamboo sticking out 6 feet behind the truck. I was just going to take it all to the dump, but then I remembered the elephants. I remembered calling the Woodland Park Zoo once a few years before and asking them if any of their creatures liked to eat bamboo because I had a lot of it. They said yes, the elephants love it so long as it has never had any chemicals on it. Since I am Darwinistic about my yard, and because I don't want a lot of stuff washing off of the lawn and down into the Sound, I don't use chemicals. Perfect. Since it was Sunday I was not sure if anyone would be answering the phone at the zoo, but they answered right away and had one of the elephant keepers give me a call right back. His name is Pat and he said sure, bring it on over. The elephants love freshly cut bamboo.

Alex and I tied down the bamboo so we would not have flying plants littered all down the freeway, and off we went with a firetruck full of bamboo to feed to the elephants. This is what made me think that I need to start writing some of this stuff down because how many kids, when asked what they did on the weekend, can say that they filled up the firetruck with bamboo and took it to the elephants at the zoo. Anyway, old number 91 (the firetruck) was running like a champ, and we soon got to the zoo where Pat was waiting for us in the ZooDoo truck (the pickup that they use to haul elephant poop to the composting pile where they make ZooDoo). If you are a fan of the TV show Dirty Jobs like Alex and I are, the ZooDoo truck is cool. So we got to follow the ZooDoo truck (it wasn't smelly) into the "Employee Only" area, through a gate, and right up to the back of the elephant enclosure. Pat said that the elephants are a little scared of strangers, so we could not feed them ourselves, but they were hanging over the gate. They clearly recognized a truck load of bamboo when they saw it. We unloaded the bamboo and Pat gave a few pieces to the elephants who chomped it up, stalks and all. I had to go buy giant loppers to cut that stuff down and they just ate it like it was candy. Alex asked all about the elephants, their names, where they were from, and lots of other things. Pat answered all of Alexander's questions and seemed just as happy that we brought the bamboo and were interested in the elephants as we were to get to see them. Pat said that they could polish off that whole load of bamboo in about an hour if he let them, but he didn't want to spoil their dinner which has all of their vitamins in it. He said he would give them some more as a bedtime snack, and them some more tomorrow, and maybe the next day. It was very cool. Elephants are so smart and have so much personality. This has to be the coolest way to dispose of yard debris ever.